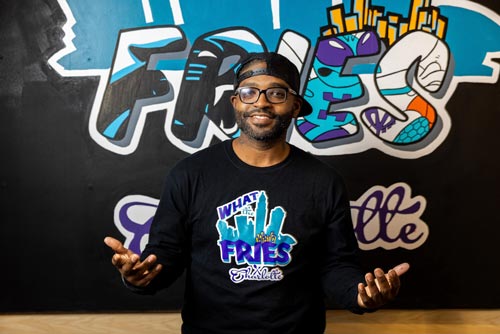 Born and raised in Columbia, South Carolina, Greg Williams has always been close to family and food. His parents and grandmother — his inspirations — instilled a hardworking mentality in him that he exemplified as he worked his way up in the food and beverage industry.

Williams attended high school in Connecticut, and then moved to Charlotte in 2004 to study culinary arts at Johnson & Wales University. While in school, he got a job at Cans Bar and Grill as a dishwasher and soon moved up to the fryer, grill and flattop. He was a quick learner with a strong work ethic that impressed chefs.

He then went on to hold leadership roles in the kitchens at Harper’s Restaurant, Levy Restaurants facilities, and former restaurants in the Uptown Marriott hotel including Savannah Red, Champions Sports Bar and Cutters Cigar Bar.

During his professional cooking career, Williams learned a lot about curing meats, cutting and processing meats, broiler cooking and other techniques, which led him to move back to Columbia to open a deli called ANDeli’s in 2012. After two years, he decided to pursue other business ventures and opened What The Fries with co-owner Jamie Barnes.

Described as quiet, low-key and reserved, William’s food is the opposite: “I enjoy creating dishes that pop with color,” Williams explains. “I always felt like people eat with their eyes first, so I like for the food to first be visually appealing and then to taste amazing.”

Williams is a founding member of Soul Food Sessions, a nonprofit pop-up dining series that raises money for scholarships to help minority culinary students. One of his proudest professional achievements was cooking at the James Beard House with the Soul Food Sessions crew in 2019. Other charity dinners he has participated in have supported 100 Black Men of Greater Charlotte, a nonprofit dedicated to increasing educational opportunities for African American youth.

Williams resides in Rock Hill, South Carolina, and has a daughter. Looking forward, he aspires to open multiple What the Fries brick-and-mortar locations in Charlotte and in different cities. 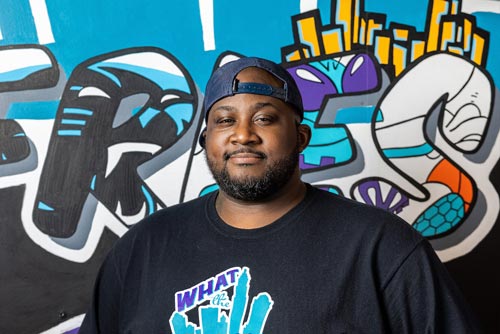 While growing up in Newport News, Virgina, chef Jamie Barnes often experimented in the kitchen and watched family members cook. His passion for the culinary arts was instilled in him at a young age. While in high school, he enjoyed watching food infomercials and “Emeril Live,” which he describes as the perfect blend of an entertaining late-night show and a cooking show. It was during that time that he decided he wanted to be a chef.

“From then on, when I prepared simple foods at home, I wanted to improve them, to elevate them,” Barnes explains. “If I was having ramen, I would top it with chopped onions, dry spices we had in the cabinet, and slices of hot dogs or lunch meat.”

In 2004, Barnes moved to Charlotte to pursue an associates degree in culinary arts at Johnson & Wales University. While in school, he worked as a dishwasher at Sonoma Kitchen in Uptown, which was later purchased and renamed ARPA. Often walking in to dishes piled up to the ceiling, he learned how to succeed in a fast-paced kitchen — grooming him for his future role as a food truck owner. He gained knowledge from watching chefs in the kitchen and later moved to the cold line, pantry station and ultimately sous-chef as he worked his way up over the years. In 2008, he took on the role of sous-chef at the Mediterranean-inspired Illios Noche before moving back to Northern Virginia to be the head chef at contemporary American eatery Foxfire Grill. He was called back to Charlotte, where he held leadership roles in the kitchen at Shads Landing retirement community and Ballantyne Country Club before pursuing What the Fries full time as a catering business and then as a food truck with business partner Greg Williams.

“After a decade in the restaurant industry, I stopped caring about the ‘traditional’ way of doing things. With What the Fries, I was able to put my spin on dishes while elevating them. I call it freestyle cooking,” Barnes says. “I love for people to read a dish on paper and think it’s not going to work but then be impressed after tasting it.”

Barnes is a founding member of Soul Food Sessions, a nonprofit pop-up dining series that raises money for scholarships to help minority culinary students. He is also an inaugural professional member of the Piedmont Culinary Guild and passionate about supporting Autism Charlotte.

Barnes says his wife, Alicia, who serves as event and marketing manager for What the Fries, is his inspiration and the support that keeps him going along with his two children, Lily and Levi. “It’s important to me to be humble, responsible, respectful and to have integrity, and ultimately, to raise my children with those values,” Barnes says.

The next step in Barnes’ professional journey is continuing to build the momentum for the brick-and-mortar restaurant for What the Fries and eventually opening a fine dining restaurant that celebrates the food from his upbringing in life and career.